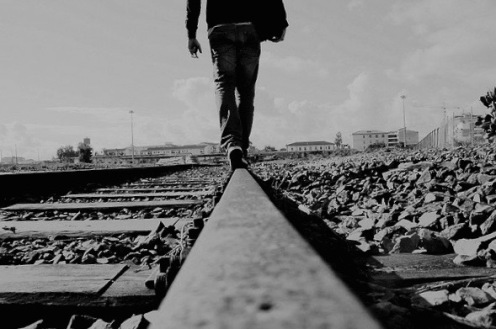 We’ve all had some kind of belief passed down to us, whether that be Christianity, Judaism, Buddhism, Islam or even Atheism. Our up-bringing gives us a platform by which we view the world.

As children we probably didn’t have much say in the matter, we just followed the path of our families. But part of maturing includes our questioning things and working them out for ourselves.

When I ask a person what they believe, I anticipate an honest response supported by a compelling explanation. I hope for something to walk away with and think about. Challenge is good, and in the end I’ve benefited from having undergone a time of searching, probing and testing.

Having faith is a matter of having complete confidence in something or someone. Throughout our childhood we leaned on our parents for direction, but there’s a pitfall in blindly adopting whatever our fathers believed based simply on the notion that they must have been right. What if our fathers’ beliefs were based solely on the belief that their fathers were right— and so on down the line. We’d be pinning our hopes on the premise that some ancestor, somewhere, actually carefully explored the question of God. That’s really not a belief system—it’s just following the path of family tradition.

In a fast paced world, upholding a faith tradition can serve as a manageable substitute for the deeper pursuit of God—not to mention being far less time consuming. Some defend their apathy by embracing the theory that, “All faiths lead to God.” Logically that just can’t be true—there cannot be contradicting yet true realities!

Atheism might be a freeing choice for some. It takes away all the pressure of making the correct eternal decision. You just live, die, and decay—there would be no conscious soul left behind to suffer the consequences of having selected the wrong religion. You take nothing with you and most will leave nothing behind. No one will likely remember your name fifty years after you’re gone—you’re just one highly analytical, insignificant spec in time with no inherent value or purpose—but you are free from the burdens of religion imposed on mankind.

I prefer adopting a faith worth following. Although my parents were Catholic and I am non-denominational, I don’t see myself as leaving the faith of my parents, but rather I embrace their strong belief in God and trust in Jesus Christ. They didn’t really know the Bible well or have a “faith vocabulary” in which to articulate the God they embraced, but they had a peace that surpassed all comprehension and genuine love that authenticated His presence in their lives.

As I walk on without them, I’m comforted knowing they left behind not some tradition, but the one thing they valued most yet couldn’t force upon me—their appetite for God.